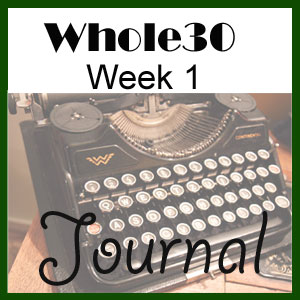 Tuesday marked one whole week of being on the Whole30.

No, it wasn’t that hard, mainly because there wasn’t too much to change in my diet.

Breakfast is where I struggled most. I don’t usually eat breakfast or eat when I first get up. Usually about 9 or 10ish is when I will have my green smoothie or a piece of fruit. So, having breakfast or a protein in the morning was a challenge. Hard-boiled eggs ended up being my go-to during this first week. This week, I still had my green smoothie, I just added the hard-boiled eggs to the side.

Snacking was another thing that I struggled with, and I gave in to a few times. Nothing bad or out of the Whole30 guidelines, usually nuts or fruit. I am a rotten snacker and unfortunately, it has rubbed off on my children. I tend to eat between lunch and dinner and between dinner and bed. I did way better this week. (Now to work on the kids *sigh*.)

We had company this past weekend, and I made homemade brownies, but I didn’t eat any with them.:) [wasn’t even tempted. 😀 ] I actually didn’t have anything as I wasn’t hungry so I thought it best not to have even a piece of fruit. My plan was to have an apple with Sunbutter.

Tuesday we ate out. I was a little worried, but I just had a salad with lemon juice squeezed on it. At home I would add Celtic Sea Salt and pepper, but I just did lemon since I wasn’t sure if I could have table salt. I also had two pieces of baked chicken removing the skin because I wasn’t sure what they put on it and some fruit.

No changes this week. I have been a little queasy the past few days. I hope it goes away soon.

Sweet potato hash was the only new recipe I tried this week. It was okay, but I most likely will not make it again.

You know what I did have that I haven’t had in decades? Tuna fish with hard-boiled eggs and mayo. My husband, Don, doesn’t like tuna with egg, so I don’t make it that way, but that is how I grew up eating it. It was yummy. You can also add tomato and onion, but I left it out this round. I enjoyed it on a bed of raw baby spinach. Perfecto!

So that was my first week. It went well and fast.