We are still using the one for the tests, but haven’t used the timed test sheet in a while. Actually, I don’t have the kids do the timed tests.

As far as the Grading Scale goes, you can use it or chuck it. In Art Reed’s book, Using John Saxon’s Math Book, he put a lot of emphasis on their test scores. This is the reason if they miss more than 6 or more, they will have to re-do the lessons and the Supplementary Practice. You can just have them re-do the lessons. So far, we haven’t had to do either. 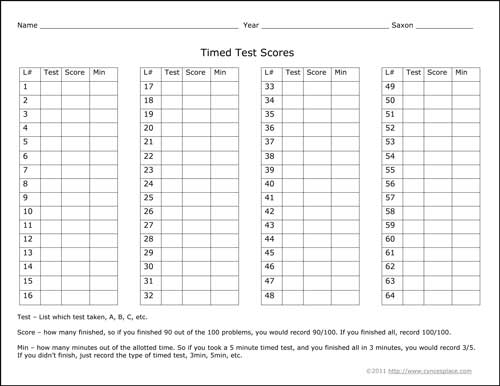 Again, this is made for the 2nd editions of Saxon Math 54-87. If you use the later editions, you can just cross through the unneeded rows. There are 3 pages up to Lesson 138.

We are using the 3rd edition of Saxon Algebra 1/2.