The kids did better this week with the kittens still being around. The kittens are now interested in solid food, so we are going to give them another week or two before we begin to give them away. We decided to keep one, the one the kids call Fuzzy. I think we will rename him Oliver after Oliver and Company. 🙂 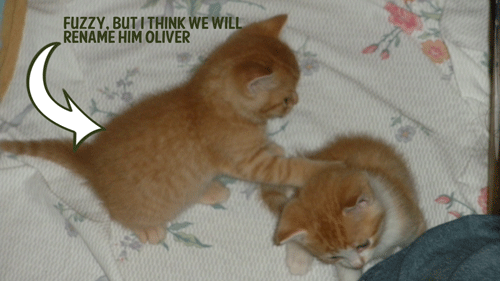 They each did 4 lessons in writing.

They took their first test for English From The Roots Up.

They each did 5 lessons in math. Donnie took his first test and scored a 100%. 🙂

But so far this year, he has been getting it done in an hour or less. I am so proud of him for not dawdling. This week, he did complain about doing math a few times and asked to do half lessons, but I told him he is capable of doing a whole lesson and a whole lesson is required.

I am trying to stick to my guns and not give in to requests such as these.

MaryEllen finished Gladyss Aylward and Donnie is almost done with the Five Little Peppers. They also read the Bible…Donnie is in Numbers and MaryEllen is in Deuteronomy. I am having them read a few chapters a day until they get through the entire Bible.

They both are plodding along in Exploring Creation With Human Anatomy. They are reading faster than I can make the notebooking pages. But it will be good review when they go back and answer the questions.

I think that is about it for this past week.

The kids went fishing with Don today. They didn’t have any luck, but lots of  f-u-n!