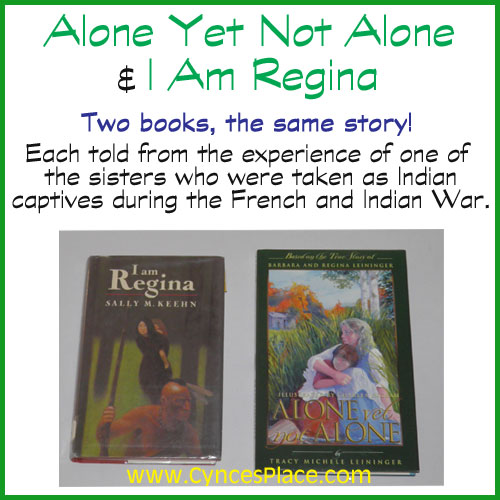 I noted in my last post that I was reading more. Well, two of the books I read were Alone Yet Not Alone by Tracy M. Leiningerand I Am Regina by Sally M. Keehn.

They are the same story but written about different characters. It is the story of two sisters who became Indian captives, Barbara and Regina, who were taken from their family during the French and Indian War. They were separated and ended up with different tribes. 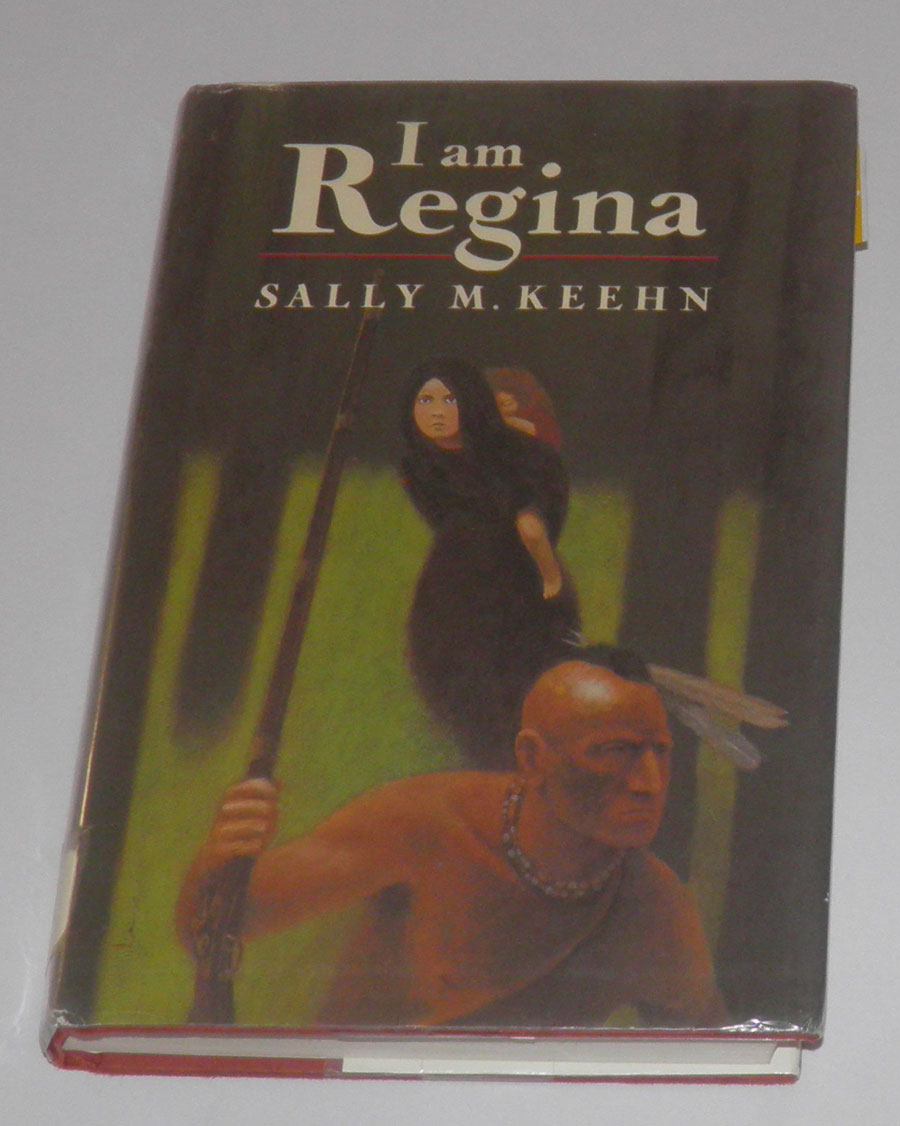 I bought I Am Regina at a library sale and it has been sitting on my bookshelf  for about four years. The story intrigued me. We might have finished Indian Captive: The Story of Mary Jemison as a read-aloud at this time, so this type of story was most likely still on my mind.

Anyway, during a sale at Vision Forum a few years back I bought Alone Yet Not Alone because the story sounded interesting. After receiving it and looking at it more, I realized it was the same story as I Am Regina.

So, I finally got to reading them. When I began reading them, it didn’t occur to me that they would be written from each girl’s experience. I read Alone Yet Not Alone first and after, wasn’t sure if I wanted to read I Am Regina because it was the same story, but I decided to thinking that since this one was about Barbara the other book might be about Regina. Sure enough!

They were both good books, but I felt Regina’s story was better told as far as imagery, Indian life, and connecting with the characters go. I enjoyed reading Regina’s story and felt myself feeling her pain, sorrow and even anger. The author of I Am Regina stayed true to their christian upbringing and included Bible passages within the text especially when things would trigger a memory. 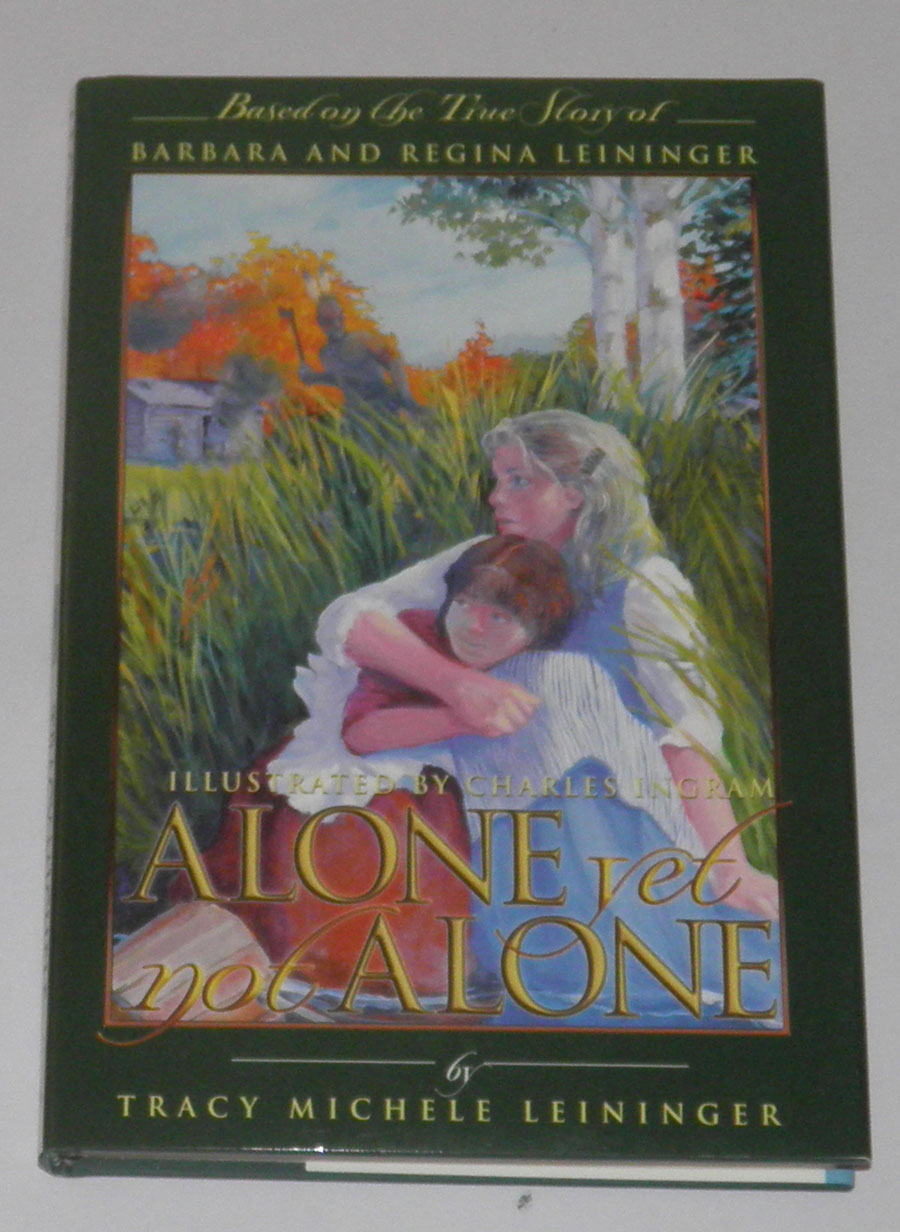 Alone Yet Not Alone I feel was written to the Christian as an encouragement that God is always with us even when we feel alone. In my simple and unhindered life, I cannot imagine the strength it took to hold onto that during this horrific time. It is only through God that they or we could get through the trials that we face in this imperfect life. The book was very encouraging in that respect.

In Regina’s story you can sense her anger about the death of her father and brother. Who wouldn’t be angry! You can sense her worry about her mother and other brother who were not home at the time of the attack. During her captivity you can relate to her loneliness, her fear of saying or doing the wrong thing, the fear of the unknown as to what will this day bring, the joy of making friends, the sadness of losing friends, the hope of the war ending or soldiers finding and rescuing her, learning to trust her captors and eventually loving them as family.

I found myself scared for her, crying with her, and also wanting her to be rescued, but at the same time torn between her new family and the one she was taken from. I can’t imagine the emotional roller coaster she must have been on.

Through Regina’s story, you got to see more of Indian life, their beliefs, struggles, pain, fear, hurt…their humanity. Regina also got to see them as people and not as ‘savages’ as they were called back then.

So, if you have read one of these books, I do recommend you read the other one too. Some of the details differ in each story, but the story line stays true in both.

I just found out today that a movie is set to release of Alone Yet Not Alone in June of 2014 according to their Facebook page. Joni Eareckson Tada sings the song that shares the title of this movie. I would love to see a movie of Regina’s story too.